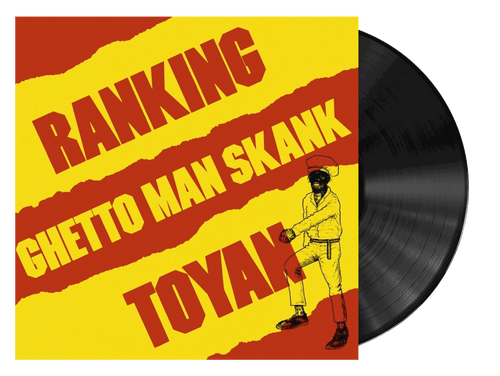 Radiation Records present a reissue of Ranking Toyan's Ghetto Man Skank, originally released in 1983. By the time Ghetto Man Skank appeared on Jah Thomas's Midnight Rock imprint in 1983, Ranking Toyan was already a seasoned veteran of Kingston's soundclash scene, having apprenticed with a number of smaller outfits before becoming earning a slot with Henry "Junjo" Lawes's Volcano Sound and winning widespread acclaim for his effortless, patois-laden delivery and his gruff putdowns of rival DJs.

Though Toyan had already cut a number of outstanding sides for producer Don Mais, his collaborations with Lawes are undoubtedly his definitive recordings. Ghetto Man Skank stands as the very best of these. It boasts a set of simple, punishingly hard rhythms from the ace studio band The Roots Radics, which Toyan dominates with ease. His ability to spill forth unending streams of wordplay, streetcorner boasts, and infectious slogans is truly remarkable, enlivening every song on this set. Though Toyan didn't receive the same acclaim as fellow Volcano Sound DJs like Yellowman and Eek-A-Mouse, his outstanding performances on Ghetto Man Skank prove he was their equal in every respect.